Environmental Toxin Bisphenol A (BPA): Brain Damage in a Bottle 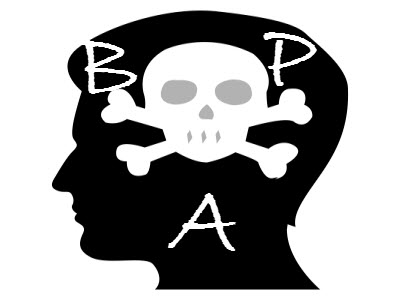 BPA Now Widely Used And In the Food Chain

Like far too many environmental toxins, bisphenol A or BPA entered the human food chain with all the stealth of a government spy trying to isolate a leak at the topmost echelons of an administration.

First isolated in 1891 by a Russian scientist, Aleksandr Dianin, it wasn’t until the 1930s that another scientist, Charles Edward Dodds, determined that BPA was the synthesized double of estrogen, a human hormone that affects the female reproductive system.

Dodd’s research of BPA focused on rats, and ultimately recognized the additive as an endocrine disruptor which imitates the functions of estrogen and can result in negative health effects in both males and females.

In spite of that conclusion, nothing was done until 1997, when researchers found that laboratory animals, even those receiving low doses of BPA, were affected. In fact, according to one source, the issue is still up in the air even though BPA has been outlawed as a toxic substance in Canada. Subsequently, the United States and the European Union have banned the substance in baby bottles.

Unfortunately, that’s only the tip of the iceberg.

With (plastic manufacturer’s) lobbyist funding, studies aimed at revealing the exact dangers of BPA have been sidelined. This compound, manufactured in huge quantities, is used in the making of polycarbonate plastics and epoxy resin, notably the lining of food and drink cans, as well as eyeglasses and crucial medical equipment and procedures like dialysis, blood oxygen machines and neonatal incubators.

Approved by the U.S. Food and Drug Administration in the 1960s, BPA has gone on to insert itself in almost every facet of modern human life.

Because it is both durable and shatter resistant, it goes into making the handles of tools and kitchen utensils. Because it can be completely transparent, as well as lightweight and unaffected by heat or cold, it is ideal for use in making CDs and DVDs, as well as Blu-Ray and other discs. It also provides housing for electronic equipment; for example, the shell of cell phones, cameras, computers and televisions. In fact, BPA – as exceptionally sturdy polycarbonate – provides both safety and comfort for protective helmets, hard hats, car interiors (the dashboard, display panels and steering wheel for example) and eyeglasses.

The flip side of BPA is its effect on the human endocrine system.

As used for liners in cans, bottles, and fast-food containers, it delivers a progressively more dangerous “body burden” to both humans and animals. This burden, via the xenoestrogen content of BPA, is worst in infants and small children, who – because of their smaller size and rapid development – are most affected. In fact, in a 2008 study published in HealthCanada, experts warned that these early developmental stages provided the greatest sensitivity to BPA; other studies note that prenatal exposure can be linked to physical and neurological problems in childhood, and it is this brain-affecting component that is most disturbing. Physical ailments can sometimes be cured, or at least mitigated. Injury to the brain is seldom reversible, largely because we still don’t really know how it operates.

The industry continues to drag its feet, with The Endocrine Society noting in 2009 the adverse effects of endocrine disrupting chemicals and the Environmental Working Group, or EWG, in 2012 calling the FDA’s ban on BPA in baby bottles “a purely cosmetic measure.”

In spite of evidence to the contrary, the FDA and the U.S. Environmental Protection Agency continue to assert that BPA is safe for use in containers that hold food. BPA’s health effects – obesity, premature sexual maturity in females, erectile dysfunction and reduced libido in males, inadequate thyroid function, neurological impacts, heart disease, cancer and asthma (just to name a few) – have been documented, but the major three-letter agencies will not relent; the lobby is too well-funded, with octopus-like reach into too many levels of government.

While the government dallies, lawyers across the nation who specialize in personal injury through toxic torts try to insure that those damaged by BPA and other harmful industrial chemicals receive fair compensation for their illnesses.

As the children of today become the adults of tomorrow, that liability – and entitlement – is bound to grow, perhaps precipitously. In fact, BPA lawsuits may follow the course of former tobacco lawsuits, requiring trust funds be set up by BPA manufacturers from which a whole segment of BPA-damaged individuals can claim their fair (but small) share of money