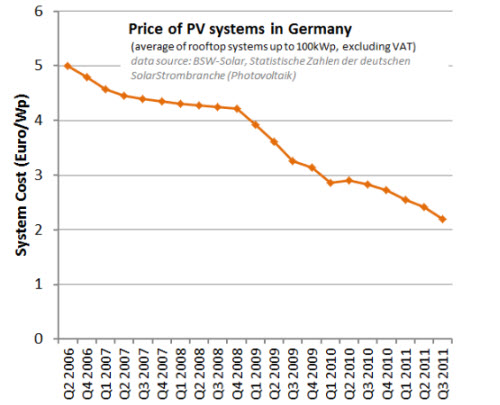 A report by Wind-Works is revealing that 51% of Germany`s renewable energy generation is owned by citizens – not by power utility companies.

When it comes to solar power alone, Germany is the largest in the world with 28 GW of solar power (PV) grid-tied as of June 2012. The German solar PV industry installed about 7.5 GW to the grid in 2011, and will most likely be on the top of the list in 2012 as well.

What is it about Germany that spurs an incredible growth in the renewable energy sector?

Germany has a feed-in energy law, the world’s first when it began, which allows citizens, farmers and community groups to install their own renewable energy systems and sell the electricity they generate for profit.

The law was passed in order to get small independent power producers a chance to get into the market and to sell their electricity for a decent price. Homeowners can put solar panels on their roof and get paid a fixed rate for every kWh they put back on the grid. In fact, the price of this rate is guaranteed for 20 years.

more than Half of Germany`s Renewable Energy is Owned by the People http://t.co/V6LKLTUN great tactic to stimulate growth

The feed-in tariff basically gives investors a guaranteed return on investment, which is a requirement for healthy development. Many green jobs have been created on the basis of Germany`s booming renewable sector and many more will open up in the future. These things help expand the market and lower the costs of renewable energy sources.

Germany`s feed in tariff is helping to spread out the production of electricity from solar, wind or other forms of renewable energy to the people, making it cheaper in the long run.