Contemporary awareness of polar bears’ possible extinction, caused by global warming effects, might be extended to a wider range of animals.

In particular, in 2012 IUCN (International Union for Conservation of Nature) introduced a list of species that are eager to disappear by 2020

….therefore, several years are left to enlarge their population or even to take revival measures. One should take into account that the number of endangered species grows from year to year, leading to bigger environmental and biodiversity problems associated with food and energy chains, habitat destruction, plants reproduction and many-many others.

..is likely to be the rarest animal species on Earth, resulting in 400-700 individuals in total. These turtles contribute to magnificent biodiversity of Madagascar Island, which is acknowledged one of the brightest wildlife spots on the planet. Distribution of the land species is strictly limited by small areas of the first growth timber on north-west of the island. Angonoka tortoise is protected by Madagascar law, but even this administrative measure cannot stop a decay of its population, caused mainly by tortoises’ export to Comoros Islands by Arabs in 17th-19th centuries. To enlarge species population it is important to save their natural habitat and, additionally, to establish specialized farms.

..from the same-named bird family is a resident of South America tropics. In fact, it’s quite a large family, a distinctive feature of which is that they have lost an ability to sing. Less than 800 manakins are dispersed over Araripe plateau (Ceara state, Brazil), which points out their adherence to the list of the most vulnerable species, especially among birds.

Save the Araripe Manakin!

CLP alumni from around the world ask you to save the critically endangered Araripe Manakin (Antilophia bokermanni) which is known locally as the Soldadinho do Araripe. This stunning bird was discovered in 1996 and is found in just one location in north-east Brazil.

Did you know that Sir David Attenborough is the Birdlife Species Champion for the Araripe Manakin?

To find out more about this bird visit http://www.birdlife.org/datazone/speciesfactsheet.php?id=30021

..is one more animal species in Brazil was underlined by IUCN  . There are less than one thousand individuals left in Atlantic forests of Brazil. Mostly this species is raised in conservation facilities, giving scientists some food for meditation and investing in population growth. Surprisingly, Brazilian zoologists revealed certain interesting demographic trends, occurred during 30 years of observation. For instance, as the number of Northern muriqui increases, mortality and birth rates increase gradually. This leads to a scientific conclusion whether the whole species collapse if it continues to grow at a pace? 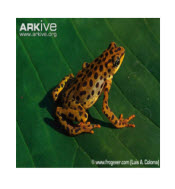 ..is a merely extinct species. For the last time it was observed in 1995, and later it was considered extinct due to increased activity of Chytridiomycota – deadly fungus that destroyed a huge number of amphibians around the world. Although stubfoot toad was gradually affected by the destructive action of the fungus and other factors, species managed to survive. The re-opening of this species of amphibians is encouraging; however, it is possible to observe them only on small, scattered plots of land in the south-west Ecuador.

..might be met in conservation institutions in Panama. The individual is a typical representative of the so-called insular dwarfism. Animal’s body length does not exceed 53 cm and the weight is 3,5 kg. Specifically, this sloth species is distributed only on Isla Escudo de Veraguas, which is near Panama shores.

Guest post by Maria Kruk, an author for Species.com