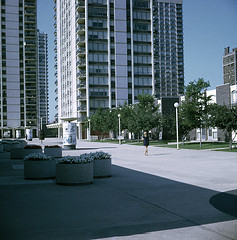 As we move forwards and the world’s population moves towards 10 billion people and more, we face the question of simply how we are going to continue fitting people into our cities.

Constructing new cities is certainly an option, and it is one being undertaken all the time. However this is not really the best solution.

We’ll go into 5 of the main reasons that the clearing more land is not the answer, and is damaging the environment.

We should build our cities upwards, and not outwards

Take a look at Google Earth. The cities and their suburbs are massive scars on the surface of the earth. We clear away native vegetation, to essentially replace it with concrete. This causes a twofold problem. Concrete stores and radiates heat in a different manner to what natural ground does. By developing more land we hurt the environment both in the immediate area, and on a global scale. There’s also the act of actually clearing the land and building structures, which in itself takes considerable amounts of energy.

Commuting to and from work creates a significant percentage of our total greenhouse gases, in terms of CO2 and other pollutants. As we build upwards rather than outwards, we stop forcing people to live far from work. Most people who work in an office can tell you of at least one or more employees who commute for over an hour each day – in their car.

3. Less Work on Cabling and other Infrastructures

If people are living in higher density situations, it is easier for various cabling infrastructures to be set up. The installation and maintenance of electricity transmission, fibre optics and old copper networks are expensive and energy-consuming operations. When people live in high density environments, we require less cabling, over a smaller area. This is a great saving for society and for the Earth.

It becomes generally more efficient to build upwards, due to modular construction methods (up to a certain height anyway). From a simple way of looking at it, only one foundation is required for multiple living areas. There are other savings too, but these are tied up with the more economical construction processes. There’s also slightly less labour required.

5. A greater spirit of community can be achieved

Some may disagree with this, and paint a gloomy picture of apartment buildings full of people who never interact. The designers of the prototype Tianjin Eco-city have set aside areas for community socialising, and there will be other efforts to encourage social interaction. From the most basic point of view, higher density housing should increase socialising in the community, as people are pushed closer to each other. It’s easier to visit other people as well.

Conclusion
These are 5 reasons why higher density living will have a positive impact on society, and the environment. As we approach the 2020 build of the Tianjin city, we will see what impact this has on the trend towards higher density living. It’s an exciting future and looks like it will be great to live in!

This article about increasing urban density for green reasons was bought to you by Attix, a quality supplier of Attic Ladders and Attic Renovations.